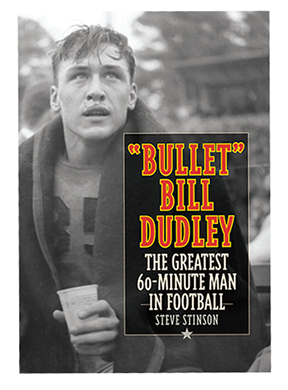 CHAPTER 4: A LIFETIME IN ONE KICK

Graham High School had never played the team from Princeton, West Virginia. Most of the G-Men, including Bill, had never been there.

The Two Virginia's game was added late in the season. It was the border state area championship—contrived and unauthorized, but consequential in the Virginia/West Virginia coal country. It was a bragging rights game.

In a grand misuse of both words, sportswriters called the game a “mythical championship.” Princeton was favored.

Princeton was a much bigger town. The Tigers were rated in the top three in West Virginia. They had beaten the Bluefield, West Virginia, Beavers, a AAA team. Graham was AA. The Graham team was down to seventeen players from twenty-four at the start of the season.

In the barbershops, the sages foretold—the question was whether Graham would lose as bad as the Beavers did, or worse.

Princeton supplied bulletin board material the week before the game. Graham had suffered several costly fumbles in the regular season, and the Tigers labeled them the “Fumbling Herd”—a play on “The Thundering Herd,” the name of the Marshall University team in Huntington, West Virginia—in the local press.

The G-Men didn’t need motivation, though. The championship game gave four Graham seniors one more shot in a G-Man uniform. They weren’t going out losers.

Bill: “Good, better or indifferent, if I participate, I want to win, period. I can’t do it for just fun. Now, I may not win. Half the time I didn’t. I’ve never been told there’s anything wrong with that. I’ve been a good sport, even when I lose, but I don’t like it.”

Coach Shearer always played the pessimist with the press before games. For this game, he clammed up. Two weeks before the game, he moved practice off the Tower Ground. The team scrimmaged on a farm three miles out of town, veiled from the eyes of likely Princeton scouts. There, Shearer had his boys rehearse new defensive schemes.

The schemes worked. Little Graham held the Princeton offense. It was a low-scoring game on a rain- and snow-soaked field. Princeton led at halftime 7–0. Graham lost two touchdowns to penalties, but came back and tied the score in the fourth quarter. The game stayed knotted until the G-Men found themselves fourth down on the Princeton 23 yard line with a minute to play.

On its previous possession, Princeton tried to pin the G-Men deep in their territory with a quick kick. The quick kick was a useful offensive weapon in the era of the single-wing offense. It’s a low-scoring offense and coaches were willing to trade loss of possession for field position. A good kicker could catch a defense off guard on third down and pin the opponent deep in their territory. They called it “flipping the field.”

The Redskins’ Sammy Baugh was peerless at it. Bill always said he could sense a quick kick coming. He would get a little smile and say, “Sam Baugh never got a quick kick over my head.”

When the Princeton eleven lined up, Bill, playing safety, saw a quick kick coming and lulled the offense by playing close to the line. At the snap, Bill hotfooted it back, made an over the shoulder catch on his 35 yard line, and returned it to the Princeton 35. Three plays later, the G-Men were on their 27 and out of downs and out of time.

Dudley huddled the boys and called a play. When Shearer saw the formation, he called a timeout. He met his young charge at the sideline.

“What are you gonna do?” asked Shearer.

Bill would later recall that Shearer didn’t bat an eye. To Bill, it was simple: He’d either make it or miss it.

Nobody in the stands had ever seen one. In 1937, a kick of this distance was scarce even in college games. The G-Men on the field, though, were unfazed by the call. They’d seen too many Billy Dudley moments like this on the Tower Ground. They were poised for the play.

At the snap, Bill kicked using an approach step. When the ball cleared the crossbar it was game over.

Here is how they reported it the next day in the Bluefield Telegraph, Saturday, November 20, 1937:

That’s the final chapter of the story of how Marshall Shearer and his G-Men drove through to the mythical championship of Southern West Virginia and Southwest Virginia. Playing on a water-logged field, and under the most deplorable weather conditions imaginable yesterday afternoon at the Princeton field, the G-Men turned in one of the biggest surprises of the 1937 pigskin semester.

The victory was one well earned. The G-Men outplayed Princeton and might have won by a much larger margin had not penalties nullified two other Graham touchdowns. It was the parting shot of the campaign which goes down in history as the finest one ever experienced by Graham high school.

The unerring accuracy of the good right toe of little Billy Dudley, brainy little quarterback of the Virginia Siders, provided the margin of victory. With the two teams knotted in a 7-7 deadlock, Dudley dropped back to the 27 yard line and booted the ball squarely between the uprights. It traveled a total of 37 yards to clear the bar.

Dudley’s kick was a fitting climax for the ball game as it was the little G-Man field chieftain who dominated the play most of the afternoon. He intercepted the Princeton pass deep in county seat territory that paved the way for the Graham touchdown.

When the clock ran out, the boy was swarmed by players and spectators. He didn’t know it, but Paperweight Dudley had just kicked his way into the University of Virginia.

Some images used are copyright protected by the Pro Football Hall of Fame. All Rights Reserved.